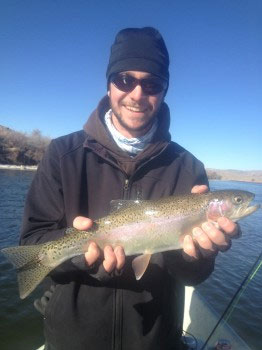 North Platte Fly Fishing Report for Grey Reef for Jan 20st 2013. The warm weather has opened up the Grey Reef for fishing. We had 1 boat that did an afternoon float trip today on the upper Grey Reef with very nice conditions. Landed lot’s of nice fish on brown pine squirrel leech’s and egg patterns. There were runs that we would hook a fish every drift through with one fisherman in the boat.

Here at Wyoming Anglers we are very understanding when it comes to switching a scheduled fishing date this time of year. If you are wanting to take advantage of our $100 off coupon and book a trip in January or February but are worried about not being able to switch your dates if we get bad weather, worry no more. We will not charge you a cancellation deposit.

As always, if you have any questions concerning our North Platte Fly Fishing Report for for Grey Reef fishing, please call or email us. We would love to hear from you!307.267.0170 / info@raftnreel.com

Snow is finally falling in the Grey Reef area, and it has slowed down the wind tunnel. More snow, less wind, equals better winter fly fishing!

With winter here the river has been slowly freezing over from below town to Government bridge, but the Grey Reef damn down-stream 8 miles remains open and fishable.

Natural Leeches, Red San Juan worms, and egg patterns are some of our favorites right now.

Don’t forget we have discounted our full day Grey Reef fly fishing trips by $100 & half days by $50 through the end of March, with an additional $50 off Christmas coupon good if a 50% trip deposit is put down by December 31st. Trip date does not have to be decided yet. This means you can buy now a full day for $275(Reg$425) and a half day for $225(Reg$325). No need to shop around, we guarantee this is the Best Rate. Don’t wait, call Now or send us an email to take advantage of this outrageous offer!

As always, feel free to call if you have any questions about fly patterns for fly fishing Grey Reef in the Winter! We are here to serve YOU! 307.267.0170 / info@raftnreel.com

Here are some facts the Wyoming Game and Fish Department released in the Casper Region Angler Newspaper in 2012 about the North Platte River from Robertson Rd to Glenrock which is 42 miles downstream of Grey Reef Dam.

We conducted a population estimate on the North Platte below Robertson Road in October. The trout population stood at 960 fish per mile with 1,070 pounds of trout per mile. Rainbow trout comprise 94% of the overall trout population with brown trout representing 6%. Rainbow trout average 14 inches in this reach with individuals as large as 6 pounds captured. The brown trout through this reach are slightly larger on average but as with the rest of the North Platte River, the largest trout present by far tend to be brown trout with the occasional brown over 10 pounds caught.

The 2011 population estimate is about average for this reach. Being located 42 miles downstream of Gray Reef Dam, this reach can be impacted by high summer temperatures and silt accumulation making it far less productive than sections closer to Gray Reef. It is interesting to note that trout growth in 2010 and 2011 was exceptional with fish at age 1 and 2 being nearly 2 inches longer than is typical for this reach. High water conditions likely served to keep temperatures and turbidity down while increasing invertebrate production and drift.

Big Muddy Access area to Rabbit Hill Access area is the lowest reach that we routinely monitor trout populations on. In October 2011, we estimated 500 trout per mile and 780 pounds of trout per mile which is meeting our population objective for this reach. Over 98% of the fish are rainbow trout with only about 10 browns per mile. Rainbow trout average 15 inches with individuals to 6 pounds captured.

The section from Edness Kimball WilkinsState Park downstream to the Dave Johnston Powerplant is annually stocked with 20,000 fingerling Firehole rainbows. In 2010 we began a study to evaluate the stocking program to see what percentage of the rainbow population are hatchery fish and whether or not continued stocking is justified. While the study will run through at least 2014 to fully evaluate, our results from the first year are interesting. We found that 50% of the 12-16 inch rainbows ( 1 year old fish) in this reach were from the 2010 stocking, and that the stocked fish averaged 2 inches longer than their wild counterparts.

Due to Alcova Reservoir spilling in 2010, 2011 and for a short period in 2012, walleye have made their way into the North Platte. Anglers are reporting catching a few below Gray Reef Dam. There has been some confusion surrounding what to do if you catch a walleye. The restricted creel limits on the river apply only to trout. If you catch a walleye, feel free to keep it (within the walleye limit of course, which is 6 walleye per day or in procession, with no length restrictions).